Many times we plan traveling to far-off destinations and just don’t realise that we are neglecting many interesting places closer to us. Having spent most of my life in Konkan region I hardly had a chance to explore central Maharashtra. The much-talked-about Indian renaissance art of Buddhist period were calling to me. But simply traveling to Aurangabad, which is in the “Marāthwādā” region was going to be daylong affair. So when I had a whole week off I decided to explore Aurangabad and nearby points of interest.

[dropcap]A[/dropcap]urangabad is not just a historical place but also boasts two UNESCO World Heritage Sites in its vicinity. The Ajanta caves and Verul rock-cut temples. The Ajanta caves are 3 hours journey away while Verul is much closer. The mighty Daulatabad fort is on the way to Verul. So I decided to spend an entire day at Ajanta and the next two exploring Verul and Daulatabad. On the third, I’d explore the city itself. So off I went.

With some of the finest pieces of cave paintings which are incredibly old (2nd century BCE) Ajanta is one of the UNESCO World Heritage Sites. I reached the entrance to the site after 3 hour journey by the state transport bus. I was pleasantly surprised to notice the guides appointed by Archeological Society of India (ASI) all over the place. Later I came across them again at Verul and Daulatabad as well. Interestingly some of them were trying to sell me on dedicated guide service for all of the 29 caves at the site for ₹1200. I knew that the guides were freely available so I suspsected that this must be purely because they don’t earn much from the official job. Nonetheless, I couldn’t afford this steep price so I decided to move along.

The caves are on a horse-shoe cliff facing a small stream that flows through dense forest. While talking to one of the friendly guides, I learnt of the interesting story of discovery of these cave paintings. The story is from the British era when deep forests cover existed in the subcontinent. Many princes and along with them the British officers would go for hunting. In 1819, a British army officer was on a trail of a tiger somewhere near where the caves are. A bullet had scraped passed the tiger and so it was bleeding. The army officer kept following the tiger to the cliff and to the opening of hidden cave. What followed was the awe-inspiring discovery of the beautiful Buddhist paintings on the walls of the viharas or the Buddhist monasteries. The cave was 10th out of the total 29 in series.

Carbon dated to nearly 2000 years ago, it is truly remarkable how people in those times must have developed these elaborate murals. The artists used ochre (coloured ferrous mud) imported from various parts of the country and from middle east in a technique called as Tempera for the meticulous painting job. The paintings depict many stories (Jātak Kathā) around the life of Gautam Buddha, the founder of Buddhism and other events in his life.

There is just so much to write about what I saw and learnt that it’s impossible to express everything in words here. Just for example, in one of the caves has a painting of Bodhisattva Padmapani (a form of Buddha holding lotus in hand). The demure smile, half-open eyes and the sensuous pose of the figure also is wearing a lot jewellery. A guide, explained the scene depicted and threw a beam of light on face of painting. A pearl in the ear of the Bodhisattva’s was shining with clarity.

Verul is only few kilometres on the outskirts of Aurangabad and is a sister site of Ajanta caves. This is also a UNESCO World Heritage Site and has influence of Hinduism, Buddhism as well as Jainism. The reason why this site is famous is the biggest temple in the temple complex: Kailash temple. The temple is carved out of single basalt rock. Well, one could say that’s nothing new, we have many such temples carved in single rock. Kailash temple stands out in that it was started from the top and finished at the bottom! That’s something unheard of. This engineering marvel came into existence somewhere between 5th to 10th century BCE.

The magnificence of Kailash temple is something that you have to experience in person. When you look at the huge rock-cut walls from its base, the world starts revolving around you. The temple is in the centre and has a sort of a viewing gallery from the three sides around it. The rock pillars supporting the roof of the different temple chambers look as rigid as the sculpted figures. A copper plate inscription about the site mentions: “the Rashtrakuta king built a magnificent temple that left even Gods in awe”. Out of the 34 temples in the temple complex I could visit only Kailash temple. Although I wanted to visit a few more, it started raining so I decided to return. The next time I’ll visit Verul, I’ll definitely take a look at some of the other temples as well.

Known as Devgiri or Daulatabad, the impregnable fort is so strong and built with such sophistry that you fall in love with it. Impressed with its features to remain practically unassailable, sultan of Delhi in 1328, Mohammad bin Tughluq, decided to shift capital of his empire from Delhi to Daulatābad! Ill-prepared for the journey he had to return to Delhi with his entire procession of men and supplies who started dying. This funny incident in history led to coining of an actual phrase: “Acting like Tughluq” which is still in use. With so much awe about this fort, I had to conquer it. It lies midway of Verul and Aurangabad.

Daulatabad has multiple defenses and were developed over time under different rules. The fort itself was built during the Yadav dynasty of North-Western Maharashtra believed somewhere in 12th century. It was captured several times (not even once by war but only by long sieges), was ruled by several rulers and was under Marathas for a brief period. The Yadavas, original creators of the fort, built it on a hilltop and chiseled off 200 feet of sides vertically. So the access to the fort summit is only from a specific path. To reach the summit, one has to cross moat over a narrow bridge, climb up a narrow staircase and manage to pass through a frighteningly dark and winding tunnel maze (Andhāri) with several ambush points and vents leading to fiery pits! Of course all this while fighting with a sword in hand…

It was absolutely terrific experience to follow an ASI guide through the dark tunnel maze (Andhāri) as he explained the design for ambushes. At one point he switched off the torch just give us a feel of how dark it was. I am not joking, I could not see by palm held in front of my eyes! The bats’ screeching was adding to the atmosphere. That day I returned with a big smile on my face!

Have you been to Aurangabad? What all did you see?

Travel Tips
Auranagabad is well-connected by bus, railway as well as air. The Ajanta site is remote (consumes 6 hrs to and fro) thus to fully enjoy it set aside an entire day.
Photography Tips
Caves being caves are quite dark. Unless you get a permit to use a tripod, there’s no way to get nice long exposure shots. Use props or support from the pedestals. Do not use flash (there are clear warnings signs anyway) as it damages the ancient paintings.
ExploreForts and CastlesMaharashtraSolo Travel
Facebook Twitter Pinterest LinkedIn 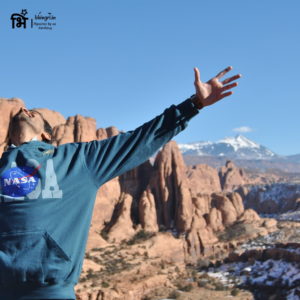